New Khirbet Qeiyafa Inscription Published. What Does it Say?

An inscription discovered in 2012 at Khirbet Qeiyafa has been published, and it contains a name found in the Bible.

The inscription is incised on a storage jar from the late-11th/early-10th century BC, the biblical period of Saul and David. The article appears in the Bulletin of the American Schools of Oriental Research (BASOR) and is attributed to Yosef Garfinkel, Mitka R. Golub, Haggai Misgave, and Saar Ganor.

The storage jar shows the name ʾIšbaʿal incised along the top. This name appears in the Bible in 1 Chronicles 8:33.  (Eshbaal in English translations.) Eshbaal was Saul’s son who is known as “Ish-bosheth” in 2 Samuel chapters 2 through 4. After Saul’s death, Eshbaal reigned as a rival of David from across the Jordan River and was eventually assassinated by his own servants.

The name in this new inscription refers to a different individual (son of Bedaʿ) but demonstrates the use of this particular name in Canaan during this period. The context of this name on the jar has not been established, but it may refer to the origin of the contents. 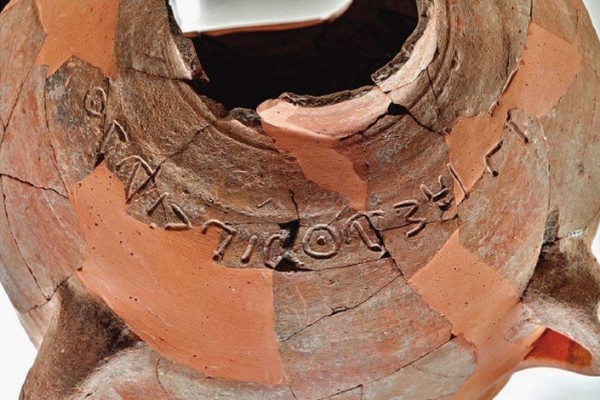 The “Išbaʿal” (Eshbaal) inscription from Khirbet Qeiyafa, discovered in 2012.  (Photo by Tal Rogovski)

The article points out that the name “Baal” often refers to a deity in the biblical text but can also mean “lord/master” in a general sense. The root “Baal” appears in numerous biblical names but disappears from the region of Judah in textual/biblical and archaeological records after the 10th century BC.

The article can be viewed on Academia.com. It will also be available soon via JSTOR.

My previous post mentioned that this inscription would soon be published. (Thanks to Yossi Garfinkel for the heads-up.) Another inscription discovered at Tel Lachish in 2014 should be published in the near future.

5 Responses to New Khirbet Qeiyafa Inscription Published. What Does it Say?