Archaeologists from the Israel Antiquities Authority have found the northernmost wall of 1st century AD Jerusalem and discovered the point where the attacking Romans breached it during the Jewish War in AD 70. Excavators found many ballista balls and sling stones fired by the Romans during the battle. You can read the original press release here.

Josephus records how the Romans under Titus besieged Jerusalem and broke through the northern defenses. The fighting eventually reached the Temple Mount and resulted in the destruction of the entire city.

Perhaps many of us have seen maps of 1st century Jerusalem showing two possible locations for the northernmost wall. This find seems to settle that debate, showing the city wall located well north of the current Ottoman wall. This article describes the finds and has photos.

The excavation site in the Russian Compound. One can see the sling stones on the floor, which are tangible evidence of the battle that was waged here 2,000 years ago. (Photographic credit: Yoli Shwartz, courtesy of the Israel Antiquities Authority.) 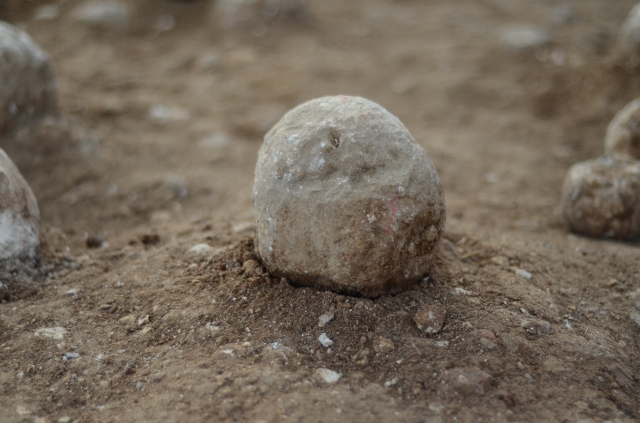 A sling stone on the ground, used during the battle waged along Jerusalem’s northernmost wall nearly 2,000 years ago. (Photographic credit: Yoli Shwartz, courtesy of the Israel Antiquities Authority.)

A spearhead from the battle against Titus’ army. (Photographic credit: Clara Amit, courtesy of the Israel Antiquities Authority)

Also… scholars are about to reveal  a 7th century BC papyrus fragment from the Judean Wilderness that mentions “Jerusalem” in Hebrew. This dating puts the fragment around the time of Uzziah or Hezekiah, perhaps even Manasseh. It will be formally presented in a conference next week.

There is one problem with this Hebrew fragment. It is unprovenanced, meaning we don’t know from where it came. Radiocarbon tests supposedly date the papyrus material to the  7th century, so we will hope the inscription is just as old. Forgers have been known to create fake ancient manuscripts on ancient materials.

Aren Maeir will be a respondent in next week’s conference session on this papyrus. He wrote about it under a gag order but the cat seems to have gotten out of the bag with this short article. We’ll hope that when full details are revealed, its authenticity can be confirmed.

Luke holds an M.A. in Ancient and Classical History and has been an adjunct professor at Florida College in Temple Terrace, Florida. Luke and his wife Melanie have five children. He serves as a minister with the North Terrace Church of Christ and has participated in multiple archaeological excavations in Israel. Luke leads popular study tours to Europe and the Bible Lands.
View all posts by LukeChandler →
This entry was posted in Ancient Battles, Ancient Rome, Inscriptions and Manuscripts, Israel, Jerusalem, New Discoveries and tagged Archaeology, Aren Maeir, ballista, Battles, city walls, Jerusalem, Manuscripts, papyrus, Romans, Rome, sling stone. Bookmark the permalink.