The New “Dead Sea Scrolls” – Are They Real?

My previous post on newly-surfaced fragments of “Dead Sea Scrolls” mentions they may be a great discovery “if they can be authenticated.” A followup article by the same author asks if some or most of these fragments are forgeries. That’s an important question since they are unprovenanced. (def.- We don’t know where they come from.)

Why might many be fake? According to Tigchelaaar only one or two of the new scroll fragments, a “statistically impossible” low number, appear to belong to the collection of Dead Sea Scrolls discovered in caves near Qumran. Some fragments seem to have small letters crammed into the limited space on the papyrus fragments, which shouldn’t be the case since the fragments would have detached from larger scrolls. These new fragments also consist entirely of Bible texts, but the Dead Sea Scrolls include many non-biblical texts.

It is exciting to find potential Dead Sea Scrolls, but we should not embrace these kinds of new discoveries too quickly until we can confirm if they are truly ancient. 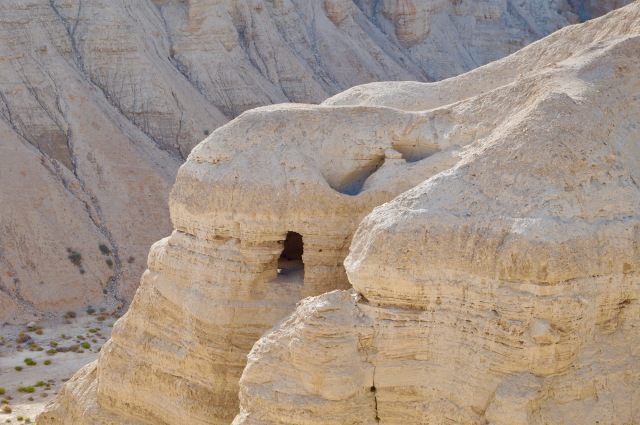 Cave 4 at Qumran, which yielded the largest number of Dead Sea Scroll manuscript fragments. There have been many caves along the shores of the Dead Sea, and perhaps some of the newly-surfaced scroll fragments originated in these. There is a lot of antiquities fraud, so we must be careful about accepting new claims as true. (Photo by Luke Chandler)

Luke holds an M.A. in Ancient and Classical History and has been an adjunct professor at Florida College in Temple Terrace, Florida. Luke and his wife Melanie have five children. He serves as a minister with the North Terrace Church of Christ and has participated in multiple archaeological excavations in Israel. Luke leads popular study tours to Europe and the Bible Lands.
View all posts by LukeChandler →
This entry was posted in Inscriptions and Manuscripts, Israel, New Discoveries and tagged Bible, Dead Sea Scrolls, forgeries, Manuscripts, Owen Jarus, papyrus, Qumran, scrolls. Bookmark the permalink.