We often picture ancient cities as being surrounded by thick, solid walls for protection. There are certainly examples of this from ancient times, but the heavy expense plus the significant construction time led to an alternative city wall design that we call a casemate.

A casemate consisted of two thinner, parallel walls with empty space between them. It was faster and cheaper to build, and afforded the inhabitants extra living space in crowded cities. During times of war, the space could be quickly filled with dirt and stones to create a thicker, solid defensive wall.

A long casemate segment at Masada. Excavation has revealed that Jewish fighters and their families lived in the casemates during the Roman siege of AD 72 - 74.

The Bible account of the conquest of Jericho suggests Rahab the prostitute’s house included a casemate.

She let [the Israelite spies] down by a rope through the window, for her house was built into the city wall, so that she lived in the wall. (Joshua 2:15, ESV)

Two casemates (center) at Khirbet Qeiyafa. The back one has already been excavated. The entrance to the front casemate is in its front left corner, where the black-shirted worker is. Note the outer (right) and inner (left) walls of the fortress. During siege, the space in these casemates was filled to create a single thick wall around the city.

The Elah Fortress/Khirbet Qeiyafa is surrounded by a casemate wall. I had the distinct pleasure of helping to remove the stone/dirt fill from one of them in the last days of this season’s dig. The rocks can be quite heavy.

Some of the rocks we excavated from this casemate. While they are heavy, it is still possible for workers to lift them out by hand - a necessary task when a siege is lifted and the casemate returns its peacetime use.

Solid stone walls are stronger, but the heavy use of resources or other constraints restricted their use at times. Solid walls were sometimes reserved only for vital cities such as capitals. 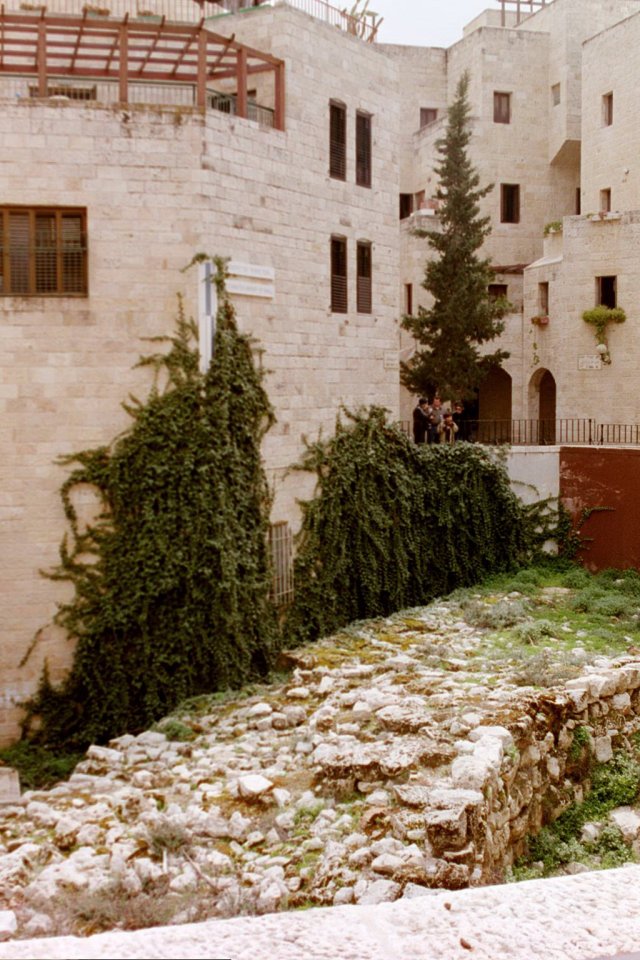 A solid Iron Age IIb wall in Jerusalem. This wall has been identified with King Hezekiah's construction and fortification work in 2 Chronicles 32:5.

Luke holds an M.A. in Ancient and Classical History and has been an adjunct professor at Florida College in Temple Terrace, Florida. Luke and his wife Melanie have five children. He serves as a minister with the North Terrace Church of Christ and has participated in multiple archaeological excavations in Israel. Luke leads popular study tours to Europe and the Bible Lands.
View all posts by LukeChandler →
This entry was posted in Biblical Archaeology, General Archaeology, Israel and tagged Archaeology, Art & Architecture, Biblical Archaeology, casemate, city walls, Elah Fortress, Israel, Jerusalem, Khirbet Qeiyafa. Bookmark the permalink.