Posted on September 8, 2020 by LukeChandler

Remember the 2,000 year-old date palm from Masada? The original tree, nicknamed Methuselah, is now a daddy thanks to patience, science, and a little bit of luck. In a happy, very un-2020 report, we have a harvest of new ancient dates. These fruits are direct, first-generation descendants of ancient seeds excavated at Masada and a site near Jericho.

A New York Times article shares the fascinating story of the extinct Judean Date Palm’s revival, along with several photos. No paywall at the time of the writing, but that could change. Keep an eye open for other reports on this wonderful result. For previous posts on the process of reviving ancient date palms, see here and here.

Judean dates were famous in antiquity for their taste and medicinal properties. Ancient Roman authors and coins, and even the Koran, attest to their popularity long ago. How do these new, revived dates taste?

“They were tasty… with a fresh flavor that gave no hint of their two-millenium incubation period. The honey-blonde, semi-dry flesh had a fibrous, chewy texture and a subtle sweetness.”

My friend Shane Scott raises a frightening parallel with Jurassic Park, but perhaps we will avoid the spectacle of angry Date Palm Ents stomping around the Jordan Rift Valley.

Let’s close with another quote from the NYT article.

“Lucky, it tasted good,” Dr. Solowey said. “If it had been awful what would I have said? That in the old days they didn’t know what a good date was? There’s a lot of literature about how they were the best dates in the world.”

Congrats to the team on reviving ancient and DELICIOUS dates. Wouldn’t it be nice if they can be produced and harvested in sufficient quantities to allow the common folk to experience a taste of the ancient past? With a little bit of luck…

Few Bible books match the geographical detail and vivid storytelling of Samuel. BiblePlaces has a promotional $49 price for its new Photo Companion volume to 1 Samuel. Every chapter is brought to life by the 3,000+ PowerPoint photo slides with illuminating descriptions and study notes. This important resource helps you visualize – and better understand – events surrounding Saul, Samuel, David, and the transition towards Israel’s United Kingdom.

The volumes of the Photo Companion to the Bible series provide distinct perspectives from other resources. The images and their descriptions bring us closer to the original perspective of the biblical authors and audience.

The 1 Samuel volume to the Photo Companion to the Bible series. More than 3,000 photo PowerPoint slides with informed descriptions to illuminate the entire book.

BiblePlaces continues to create these unique and valuable resources for study and teaching. I am thankful to have my copy. Order before the price goes up!

Posted on August 8, 2020 by LukeChandler

There is a special opportunity to see and learn how archaeology really works this Sunday evening, August 9, at 8pm Eastern Time. For just $10 (only $5 for ASOR members) you can attend a live webinar from the Biblical Archaeology Society on “Digging Deeper: How Archaeology Works.”

This affordable webinar is hosted by Dr. Eric Cline, an internationally renowned archaeologist with more than thirty seasons of excavation experience. His archaeological work ranges from Greece and Crete to Egypt, Israel, and Jordan. Dr. Cline is also a Pulitzer-nominated author and is currently co-directing a new dig at biblical Hazor with Yossi Garfinkel, the archaeologist with whom I have worked for years. 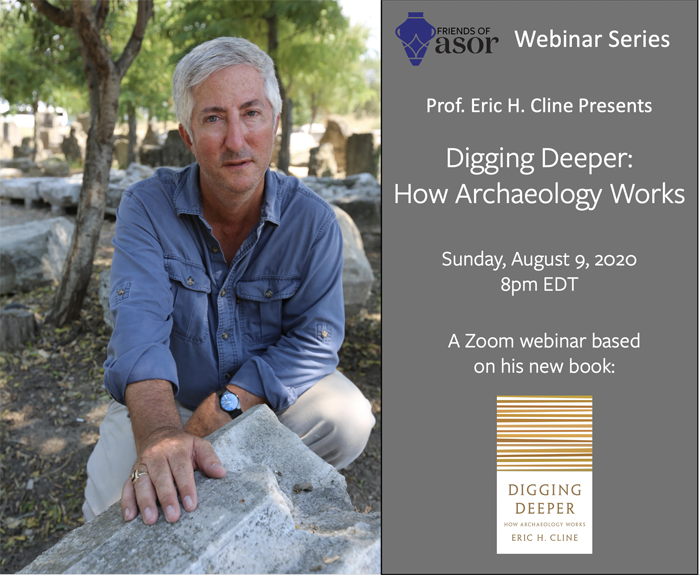 Your $10 (or $5) registration includes several benefits:

To register and pay, click here. Again, the price is $5 for ASOR members and $10 for non-members. To receive your ASOR member discount, log into the online store. If you are new to ASOR, please click on the “New Visitor Registration” link. Please e-mail membership@asor.org with any questions or issues with registering.

You will be e-mailed the Zoom Webinar link prior to the lecture on August 9, 2020.

Prof. Cline graciously offered my 2014 Bible Lands tour group a personal guided tour of Megiddo. I had inquired about a staff member taking us around since many in my group were working at the Lachish excavation that year. I had visited Megiddo numerous times previously but no visit before or since has offered what he did. It was an entertaining, insightful journey through the site and its history, sprinkled with fun anecdotes.

Prof. Eric Cline giving my group a personal tour of Megiddo in 2014.

This webinar will be worth far more than the small expense. I hope you will join!

In a surprising announcement, Lipscomb University in Nashville has acquired the premier Archaeology graduate program that formerly belonged to the Southwestern Baptist Theological Seminary. SWBTS’s program had become prominent in Biblical Archaeology but fell victim to financial pressures that have been credited to the COVID-19 pandemic. The program was axed this past April with all professors let go and 25 graduate students dropped before completing their degrees. SWBTS’s work had included recent excavations at Tel Gezer and Tel Burna (possibly biblical Libnah).

Posted on February 8, 2020 by LukeChandler

An Israeli research team has now germinated six more date palms from ancient seeds excavated at Dead Sea sites including Masada and Qumran. These young plants have been named Adam, Jonah, Uriel, Boaz, Judith, and Hannah. Date palms have gender, so the female trees produce fruit when cross pollinated with male trees. Once the “Judith” and “Hannah” trees produce flowers, scientists plan to add pollen from Methuselah and revive these ancient varieties of dates.

There are several short articles on this and they’re all interesting. Learn how the seeds were selected and revived, and how they got their names. Read about it all here, here, and here. You can also read the formal announcement published in Science Advances. See photos of the ancient seeds and saplings below.

If you have traveled to Israel, you’ve likely visited the place in the photograph below. Do you recognize it? Take a few seconds to figure it out before reading further.

It looks quite different now due to recent work to show more of the ancient ruins.

If you haven’t identified it yet, the solution is below…

This is the Roman theater in Caesarea Maritima with the stage area removed. The stage visitors have seen and stood on for decades was a modern reconstruction. Now we can see the ancient chambers below. For an explanation, see this post by Mark Ziese.

Does it snow in Israel? As sure as snowflakes, it does.

Israel has recently experienced storms across the country, including one in the north that dropped nearly 14 inches (35 cm) of snow on Mt. Hermon. Canaan is not blessed with consistent winter snow but Mt. Hermon normally receives it every year. The melted runoff feeds sources of the Jordan river, which in turn feeds the Sea of Galilee, the country’s largest freshwater reservoir.

Photo of snow on Mount Hermon on Dec. 27, 2019. As the image indicates, this particular storm came during Hanukkah. (Photo credit: MT. HERMON MEDIA)

The biblical text mentions snow numerous times. Perhaps the most famous reference is the Lord’s statement in Isaiah 1:18, “though your sins are like scarlet, they shall be as white as snow.” We may also recall David’s plea to “wash me, and I shall be whiter than snow.” (Ps 51:7)

Snow is an image of renewal and refreshment. Whether we see snow in person or in images like the one above, it is a reminder that the Lord purifies corrupt, stained ones who turn away from sinful behaviors and obey Him.

Just in time for Black Friday specials, BiblePlaces has released Joshua, Judges, and Romans for its Photo Companion series. This is comes out to 7,500 photos linked with the full text of these three biblical books, already formatted for PowerPoint, with invaluable explanations and commentary. This is a fantastic gift for any student or teacher of the Bible, including yourself.

Each volume is currently on sale (Joshua and Judges for $69 each, Romans for $49) but for this weekend only you can purchase all three together for just $99. This may be one of the best gift-giving values of the holiday season – seriously.

Note these details on the new volumes:

On a personal note, I already own nearly all of the other volumes. They are one of my most important resources when studying or teaching the Scriptures. I highly recommend the Photo Companion series to anyone with serious interest in the Bible or the biblical world. Every volume provides useful visualizations for what we read in God’s Word. The commentary is grounded, well researched, and understandable to both public and scholarly audiences.

Looking at the BiblePlaces website, I see that the other photo collections are currently on sale. Take a look, see what you’re lacking, and upgrade both your visual and scholarly libraries while prices are discounted.

Who Was Flavius Josephus? (Video)

Posted on November 7, 2019 by LukeChandler

Dr. David McClister explains “Who Was Flavius Josephus?” in this 10-minute video. For one, Josephus shows how the Jews read the Bible in biblical times – but there’s more, and it’s relevant for modern Bible students and believers.

David is chair of the Biblical Studies department at Florida College and has been with several of my tour groups.