How did bells on the High Priest’s garment sound?

Posted on November 4, 2016 by LukeChandler

In 2011, archaeologists Eli Shukron and Ronny Reich uncovered a golden bell in Jerusalem that may have belonged to a 1st century High Priest. Small golden bells were part of the High Priest’s official attire when ministering in the Holy Place of the Tabernacle or Temple.

On the hem [of the ephod] you shall make pomegranates of blue and purple and scarlet yarns, around its hem, with bells of gold between them, a golden bell and a pomegranate, a golden bell and a pomegranate, around the hem of the robe. And it shall be on Aaron when he ministers, and its sound shall be heard when he goes into the Holy Place before the LORD, and when he comes out, so that he does not die. (Exodus 28:33-35) 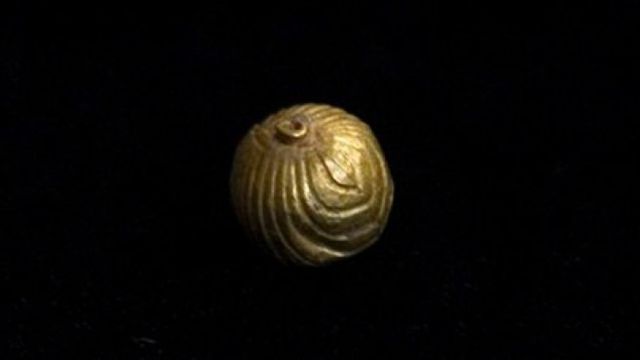 Researchers have recreated how up to 72 of these bells could have sounded on the High Priest’s garments when he walked around. The Bible does not give an exact number of bells on the ephod, though the question is debated in the Talmud.

The animated High Priest in this video walks with some swag. (Video in Hebrew with English subtitles)

The High Priest did not wear the ephod with bells when entering the Holy of Holies, on the other side of the veil. According to the Law of Moses he entered that space only one time a year, on Yom Kippur (the Day of Atonement). Leviticus 16 describes a special, all-linen outfit for that occasion.

Tell Aaron your brother not to come at any time into the Holy Place inside the veil, before the mercy seat that is on the ark, so that he may not die…. But in this way Aaron shall come into the Holy Place…  He shall put on the holy linen coat and shall have the linen undergarment on his body, and he shall tie the linen sash around his waist, and wear the linen turban; these are the holy garments. He shall bathe his body in water and then put them on. (Lev. 16:2-4)

Continuing in Leviticus 16, after completing atonement rituals inside the veil, in the Holy of Holies, and sending the scapegoat away from the camp, the High Priest was to change back into his regular vestments with the ephod and bells for the final offerings.

Then Aaron shall come into the tent of meeting and shall take off the linen garments that he put on when he went into the Holy Place and shall leave them there. And he shall bathe his body in water in a holy place and put on his garments and come out and offer his burnt offering and the burnt offering of the people. (Lev. 16:23-24)

We cannot prove the golden bell discovered in 2011 belonged to the High Priest, though it is certainly possible. If it wasn’t the High Priest’s, it was no doubt similar to ones the priest would have worn.