An inscription discovered at Tel Lachish in 2014 gives a rare glimpse into the history of the alphabet. It happens to have been found in a square worked by my nephew.

This discovery reveals new stages in the development of our alphabet, which came from this Canaanite script. Here is an excerpt from the news summary.

A potsherd slightly larger than a business card found in the ruins of a Late Bronze Age temple at the biblical site of Lachish in southern Israel has yielded a few tantalizing letters from a 12th century BCE alphabet — what one researcher called a “once in a generation” find.

The inscription, three lines containing nine early Semitic letters, was discovered during excavations at the site in 2014 and is believed to date from around 1130 BCE. It’s the first Canaanite inscription found in a Late Bronze Age context in over 30 years, the authors of the paper said. The letters were etched into a clay jar before firing, and are exceptionally clear.

The first line reads pkl, the second spr — the Semitic root for scribe — but the third has two letters of uncertain meaning (one is fragmentary). The text includes the earliest dateable examples of the letters kaf — the precursor to the Latin letter K — samekh — S — and resh — R. Samekh had never before been found in early Canaanite inscriptions. 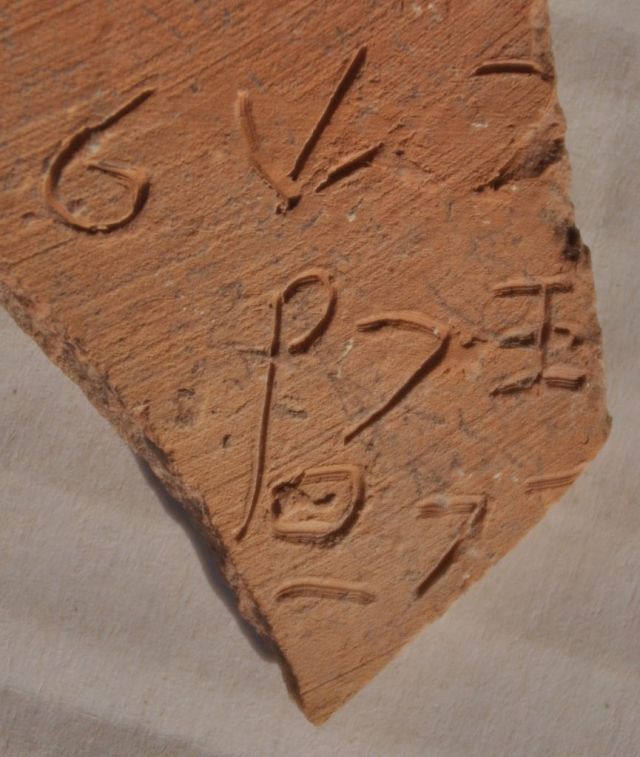 12th century BC Canaanite inscription discovered at Lachish in 2014. It is the first late Bronze inscription in Canaan discovered in over 30 years. (Courtesy of Yossi Garfinkel, Hebrew University)

I mentioned the pending publication of this inscription earlier this year. Read this news announcement then go on to read or download the full peer-reviewed article in the November/December, 2015 issue of BASOR.

Besides the inscription, excavation uncovered a bronze religious figurine, pieces of decorated bronze, and a small grinding stone from the very same square in 2014. The quantity and quality of these finds led the staff to open at least 8 adjacent squares in 2015, revealing a Late Bronze Canaanite temple in Level VI of Tel Lachish. What will we uncover next season? Join us in the summer of 2016 and help us discover more. 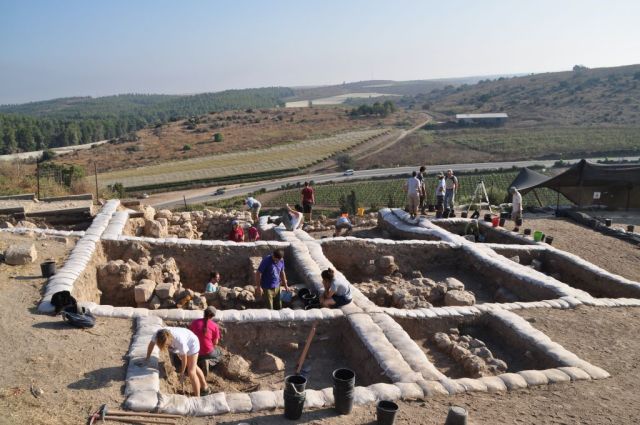 Excavating the ruins of a Late Bronze Canaanite temple (12th century BC) at Lachish in 2015. The new inscription was uncovered in a square back and to the right. (Courtesy of Yossi Garfinkel, Hebrew University)

Luke holds an M.A. in Ancient and Classical History and has been an adjunct professor at Florida College in Temple Terrace, Florida. Luke and his wife Melanie have five children. He serves as a minister with the North Terrace Church of Christ and has participated in multiple archaeological excavations in Israel. Luke leads popular study tours to Europe and the Bible Lands.
View all posts by LukeChandler →
This entry was posted in 2014 Tel Lachish excavation, General Archaeology, Inscriptions and Manuscripts, Israel, Lachish, Languages, New Discoveries, Publications & Study Materials and tagged BASOR, Canaanite, Discoveries, Inscriptions, Lachish, Yosef Garfinkel, Yossi Garfinkel. Bookmark the permalink.