A Day in Galilee

We visited several biblical sites today, starting with a synagogue from the 1st century. This building was recently discovered by the Sea of Galilee in the biblical town of Magdala. (Likely the hometown of Mary the Magdalene.) Did Jesus teach in this particular synagogue? There is no specific record, but we do have these texts:

“He went throughout all Galilee, teaching in their synagogues and proclaiming the gospel of the kingdom.” (Matthew 4:23)

“Jesus went throughout all the cities and villages, teaching in their synagogues and proclaiming the gospel of the kingdom.” (Matt. 6:35)

“He went throughout all Galilee, preaching in their synagogues.” (Mark 1:39)

“Jesus returned in the power of the Spirit to Galilee, and a report about him went out through all the surrounding country. And he taught in their synagogues, being glorified by all.” (Luke 4:14-15)

Would these references include this synagogue in Magdala, located along the principal highway in the region? Personally, I would think so. 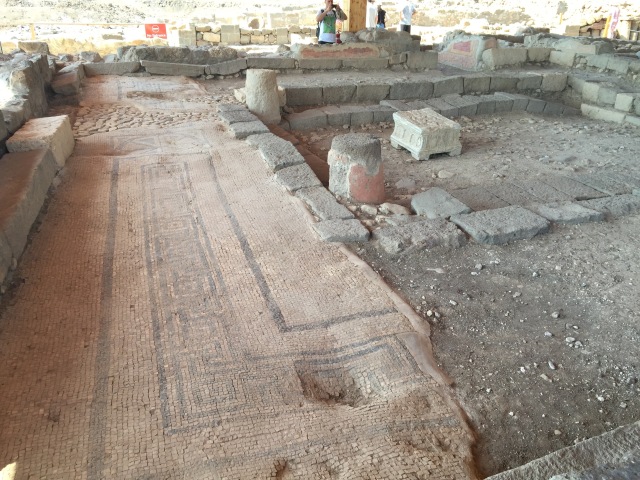 The 1st-century synagogue in Magdala. Benches for worshipers can be seen along all four walls. The speaker likely stood in the center area near the decorated stone. (Photo by Luke Chandler)

Developers have built a new church building by the synagogue for the benefit of religious tour groups that visit. The pulpit is a large boat designed to simulate Jesus’ speaking venue in the beginning of Matthew 13. I have never seen a church quite like this one. 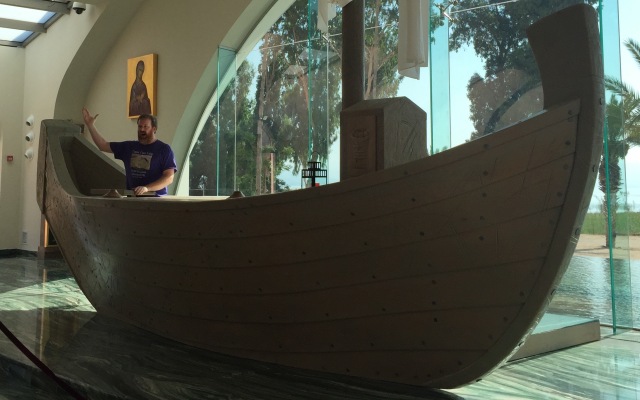 A church has been built in Magdala with a boat replica for a pulpit. I took the opportunity to make a powerful, profound point about something.

We traveled next to Abel Beth-Maacah, a biblical site along the north border of Israel. This city was famous for an event marking the conclusion of a rebellion against King David. The story involves Joab, an old woman, and a certain man named Sheba who lost his head. You can read this curious little story in 2 Samuel 20.

Abel Beth-Maacah is currently in its third season of excavation. We were able to visit while the team was in the field and spoke with Dr. Robert Mullins, co-director of the archaeological expedition. He and some of the volunteers gave us some updates on what they have been finding. They are uncovering interesting things from around the time of the books of Samuel, plus other periods. This will be a good dig to follow over the next few years.

Luke with Dr. Robert Mullins, co-director of the excavation at Abel Beth-Maacah.

We traveled just a few miles to the site of ancient Dan. This site is one of my favorite places to visit and has impressive biblical structures. There is too much at Dan to mention in this post, so I will make do with a photo of one of the water springs. Dan is a major source of water for the Jordan River. 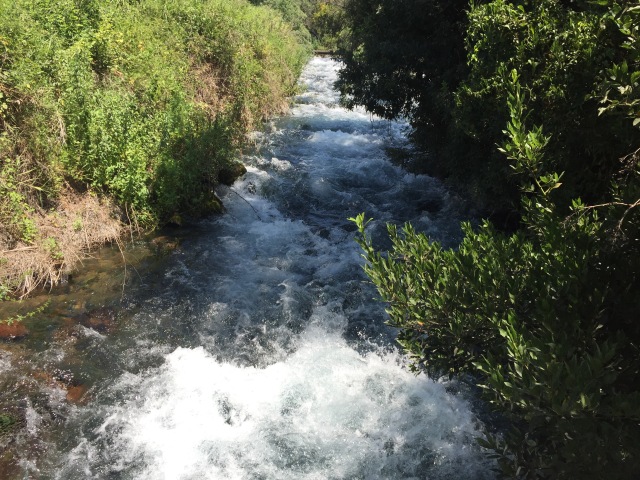 On of several rushing springs at Tel Dan. The site is the most significant source of the Jordan River. (Photo by Luke Chandler.)

After Dan, we traveled south to Hazor. This was by far the largest city in Canaan prior to the Israelite conquest. Later, Solomon rebuilt the upper city as an administrative center for his government in Jerusalem. It is always enjoyable to walk through the ancient gate.

The “Solomonic” gate at Hazor. Three gate chambers are visible on the left side. There are three more chambers opposite the ones seen here. These chambers had multiple uses including defense, tax collection, worship, courts of law, commerce, and legal matters. (Photo by Luke Chandler)

Our last site visit was to Capernaum, along the northern shore of the Sea of Galilee. This town is well-known from Jesus’ ministry. This photo show a white limestone synagogue built several centuries after Jesus. It is interesting that this building appears to have been built on top of the synagogue from the 1st century – Jesus’ time. 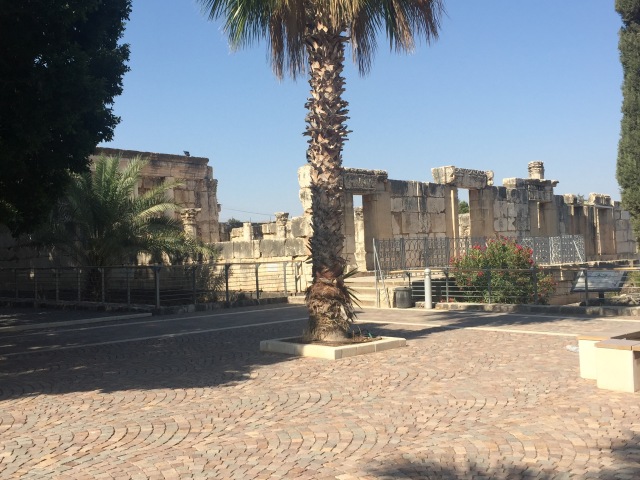 The late Roman-early Byzantine synagogue at Capernaum. This building is built on top of the 1st century synagogue. (Photo by Luke Chandler)

We checked into our Guest House after a long-yet-successful day of sightseeing. Here is the Sea of Galilee as viewed from where we are staying.

The Sea of Galilee viewed from the Poriya Guest House. (Photo by Luke Chandler)

Tomorrow is another day to visit biblical sites.

Luke holds an M.A. in Ancient and Classical History and has been an adjunct professor at Florida College in Temple Terrace, Florida. Luke and his wife Melanie have five children. He serves as a minister with the North Terrace Church of Christ and has participated in multiple archaeological excavations in Israel. Luke leads popular study tours to Europe and the Bible Lands.
View all posts by LukeChandler →
This entry was posted in Bible Lands tour, Galilee, Interesting places to visit, Israel, Jesus, New Discoveries and tagged Abel Beth-Maaca, Capernaum, Dan, Galillee, gates, Hazor, Jordan river, Magdala, Poriya, Robert Mullins, Sea of Galilee, synagogues, Tel-Dan. Bookmark the permalink.