Location of the new gates at Tel Lachish

Here is a photo showing the northeast corner of Lachish, where Garfinkel has identified new entrances to the ancient city. These entrances are on the opposite side of the site from the late Iron Age gate discovered in the 1930’s. 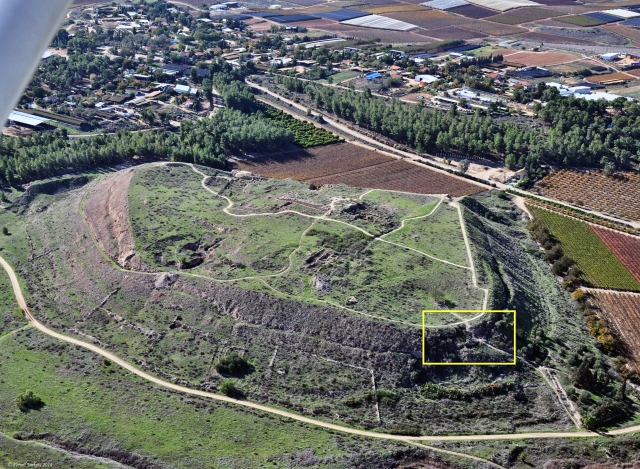 Aerial view of Tel Lachish looking west. New excavations have identified ancient openings in the city walls along the northeast corner, highlighted in the photo. Fresh excavation in and around the highlighted area has produced numerous finds. (Photo courtesy of Ferrell Jenkins)

As mentioned in my previous post, the newly-identified entrances have preliminary datings to the earlier Iron Age and the Middle Bronze periods. Readers can read about other special finds from the 2014 season here, here, here, and here. Garfinkel plans to begin excavation of the newly-discovered entrances in the summer of 2015.

Other areas along the slope and near the summit were excavated during the 2014 season. If you plan to be in San Diego for the annual meetings (BAS, ASOR, SBL, et al.) this November, keep an eye open for some informative sessions on Lachish.

Caveat: I will emphasize (as in this post and the previous one) that the gate discovery and dating is preliminary. Only excavation can confirm these conclusions. It is good to focus interest and enthusiasm on these finds, but it is also wise to patiently await the results of the 2015 season!

Luke holds an M.A. in Ancient and Classical History and has been an adjunct professor at Florida College in Temple Terrace, Florida. Luke and his wife Melanie have five children. He serves as a minister with the North Terrace Church of Christ and has participated in multiple archaeological excavations in Israel. Luke leads popular study tours to Europe and the Bible Lands.
View all posts by LukeChandler →
This entry was posted in 2014 Tel Lachish excavation, Ancient Architecture, archaeologists, General Archaeology, Israel, Lachish, New Discoveries and tagged ASOR, Discoveries, gates, Lachish, SBL, Yossi Garfinkel. Bookmark the permalink.