Today was a very good day at the Tel Lachish archaeological excavation. Our volunteers discovered gold jewelry from the Late Bronze Age plus an Egyptian scarab that may be inscribed with a Pharaoh’s name. 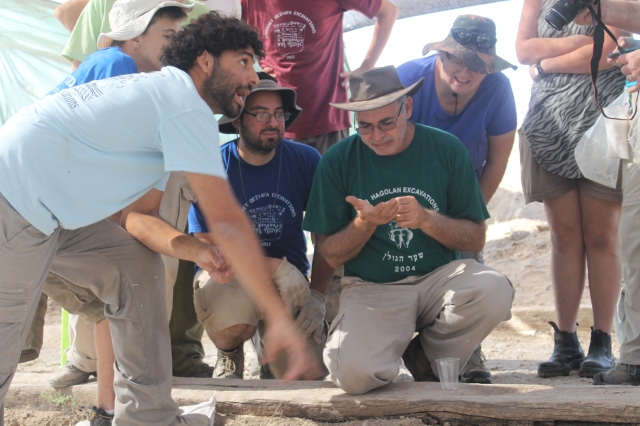 Prof. Yossi Garfinkel and others examining the gold jewelry found by Wayne Galloway at Tel Lachish. This find obviously generated interest among everyone at the site. If inscribed with a Pharaoh’s name, it may be useful in dating (or confirming the date of) the city level in which it was found. (Photo by Luke Chandler)

An upper grinding stone made of basalt, used for making flour from grain. (Photo by Luke Chandler) 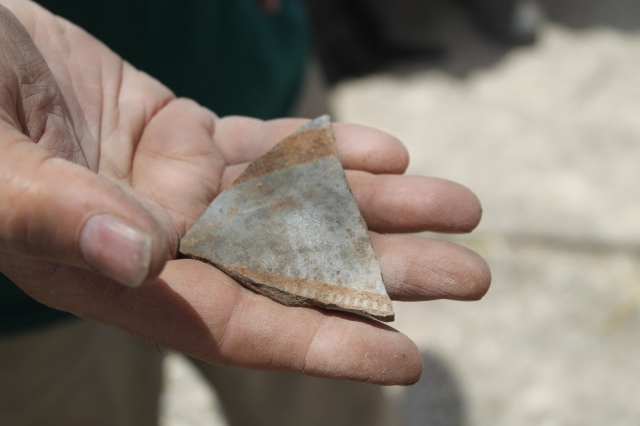 Scarabs are usually small, oval, and double-sided. One side is carved to look like a dung beetle and the other side frequently contains Egyptian hieroglyphs.

Why a dung beetle, of all things? The British Museum explains:

The image of the scarab beetle (Scarabeus sacer) is prominent in the royal funerary decoration of the New Kingdom (about 1550-1070 BC). After laying its eggs in a ball of dung, the scarab beetle rolls the ball before it wherever it goes. When the young beetles hatch they appear, apparently miraculously, from the dung. Thus to the ancient Egyptians the scarab beetle was a symbol of rebirth and represents the god Khepri, who was thought to push the sun disc through the morning sky, as a scarab beetle pushes its ball of dung.

Views of an Egyptian scarab similar in some ways to one found at Tel Lachish in 2014. Notice the top view (L) and side view (R) showing features of a dung beetle. (Courtesy of the Oriental Institute)

Detailed photos of the jewelry and scarab will be published later, following cleaning and analysis.

The gold jewelry was found by Wayne Galloway, one of the members of my group. The scarab came out of a square manned by two other group members. Not surprisingly, we are all fairly excited. Tomorrow is our last day with the excavation before moving on to several days of touring other sites throughout the country. While we are ready to connect with more biblical places, we cannot help but wonder what will be discovered at Lachish after we leave. In any case, our two weeks at Tel Lachish have been more productive than anticipated, and we still have one more day to go!

Luke holds an M.A. in Ancient and Classical History and has been an adjunct professor at Florida College in Temple Terrace, Florida. Luke and his wife Melanie have five children. He serves as a minister with the North Terrace Church of Christ and has participated in multiple archaeological excavations in Israel. Luke leads informative, meaningful tours to Europe and the Bible Lands.
View all posts by LukeChandler →
This entry was posted in 2014 Tel Lachish excavation, archaeologists, Biblical Archaeology, General Archaeology, Israel, Lachish, New Discoveries and tagged Archaeology, Biblical Archaeology, Discoveries, gold, grinding stone, imported cypriot ware, jewelry, Lachish, scarab, Wayne Galloway. Bookmark the permalink.