Why a Fourth archaeological expedition to Lachish?

Why undertake a fourth archaeological expedition at Tel Lachish? This is a good question since this site has been previously excavated over a number years, most recently in 1994. What does our new expedition hope to achieve?

Tel Lachish has multiple layers with remains of different civilizations going back thousands of years. Even after previous work at the site, important questions remain about the history of this biblical city. One key debate involves the dating of several Iron Age (biblical kingdom period) levels at the site. Here is a sketch of the most recent levels of the site’s occupational history according to current scholarship. Beginning with the top and working down to earlier periods:

[Site abandoned for a period of time]

The Bible text states that Rehoboam “built” Lachish and other cities for defense in 2 Chronicles 11:5-9. This indicates major construction in the late-10th century BC but does not rule out the prior establishment of an Iron Age city/town at the site. Does the level 5 city belong to Rehoboam? Was it rebuilt as a much smaller city than the previous one, such as level 10 at Hazor?

Adding to the debate is the incomplete publication of the first large-scale excavations of Lachish in the 1930’s. Some of the excavated areas along the northern slopes were never published. We thus lack a good picture of the site in some important areas.

Our new excavation aims to locate the Iron Age levels and gather evidence, including carbon-14 datable materials, to help resolve the beginning and end of levels 5 and 4. This has implications in the debate over the existence and nature of the early biblical kingdoms. Did a centralized government/kingdom exist in Judah the 10th century BC, in the time of David, Solomon, and Rehoboam? Evidence regarding this lies in ancient sites such as Lachish.

We hope to gain other insights during this project, including the location of the city gate during the Early Iron and Middle/Late Bronze periods. (The current visible gate is linked to levels 3 and 2.) After just a week and a half, we have already collected a substantial amount of new data with (re)dating implications for some of the previously excavated architecture. 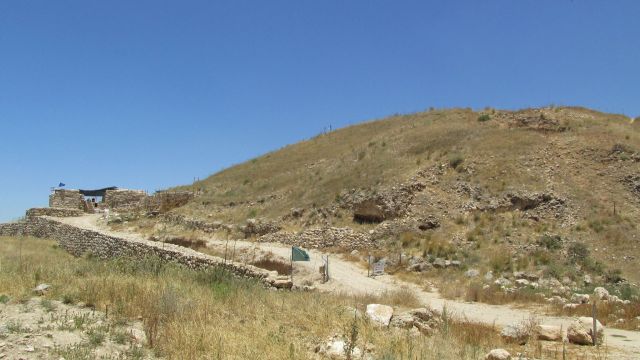 The gate associated with levels 2 and 3 at Tel Lachish. Any gates for earlier levels have not yet been located at the site. (Photo by Catherine Bishop)

More to come in later posts…

Luke holds an M.A. in Ancient and Classical History and has been an adjunct professor at Florida College in Temple Terrace, Florida. Luke and his wife Melanie have five children. He serves as a minister with the North Terrace Church of Christ and has participated in multiple archaeological excavations in Israel. Luke leads popular study tours to Europe and the Bible Lands.
View all posts by LukeChandler →
This entry was posted in 2014 Tel Lachish excavation, Ancient Architecture, Biblical Archaeology, Israel, Lachish and tagged Bronze Age, Iron Age, Lachish, Late Bronze, Level 5, Nebuchadnezzer, Rehoboam, Sennacherib. Bookmark the permalink.

5 Responses to Why a Fourth archaeological expedition to Lachish?