We have almost finished the first excavation week and have already (quickly!) found notable things. The first week in an archaeological dig can often be slow. One has to remove topsoil and gradually work down to the remains. Those interested in biblical periods may have to wait longer for the “good stuff” since many sites have remains from later centuries covering those layers. One may have to excavate Ottomans, Mamlukes, Crusaders, Arabs, Byzantines, and others before arriving at a layer from biblical times.

So how was our first week at Lachish? On the first day, we discovered a city wall dating back to biblical periods. On the second day we discovered a bronze figurine (idol) dating to the Late Bronze Age (aka the time of Joshua).  The figurine must undergo cleaning in a laboratory before its identification will be confirmed. On the third day we unearthed a large vessel whose contents included burnt seeds from a destruction layer in the city. This find is especially valuable because the seeds can be tested for Carbon-14 and produce a date for the destruction. (I will point out that all three of these finds happened in squares manned by my group.) On the fourth day we finally had “normal” results with “normal” finds including pottery, more architecture, household items, weapons/tools, and so on.

On an interesting note, it took six full seasons of work on our previous dig at Khirbet Qeiyafa to find a single vessel full of burnt seeds for radiometric dating. With this first season at Lachish, it took a total of three days. Could this be a good omen?

Collecting large quantities of burnt seeds from a vessel at Lachish. These may help to resolve a debate about when certain biblical layers of the city were built and destroyed. (Photo by Luke Chandler)

I will update soon with more news from the field. Many of the most interesting discoveries cannot yet be shown since the archaeological staff has the right and responsibility to publish them first. The finds mentioned and shown on this blog are presented with the permission of the Fourth Expedition to Tel Lachish. I can update with more details and photos at a later date.

Today’s post will conclude with a photo showing the versatility of archaeological field work. 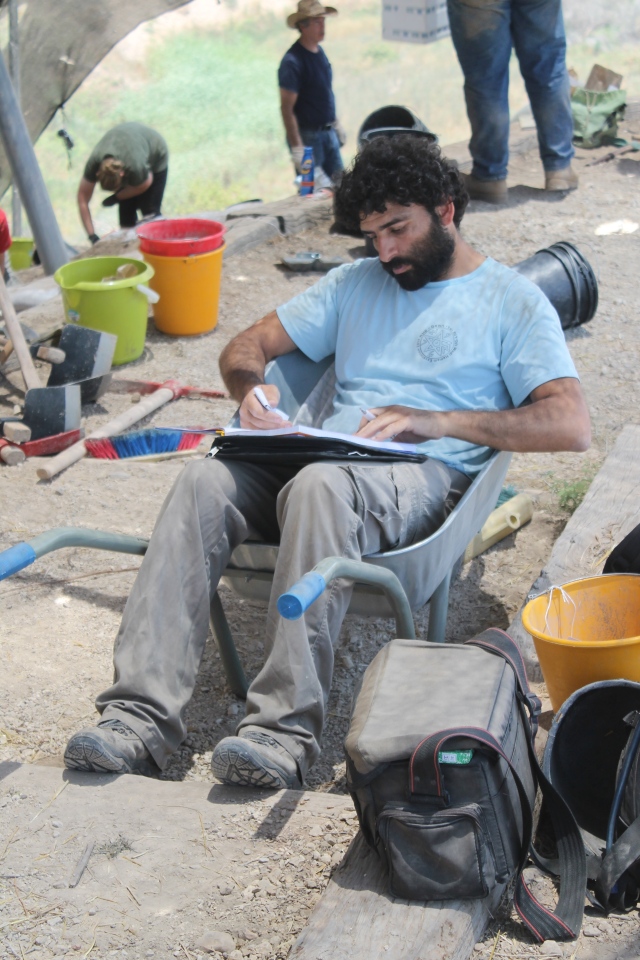 Tal, one of our square supervisors, at work in his field office. (Photo by Luke Chandler)

Luke holds an M.A. in Ancient and Classical History and has been an adjunct professor at Florida College in Temple Terrace, Florida. Luke and his wife Melanie have five children. He serves as a minister with the North Terrace Church of Christ and has participated in multiple archaeological excavations in Israel. Luke leads popular study tours to Europe and the Bible Lands.
View all posts by LukeChandler →
This entry was posted in 2014 Tel Lachish excavation, Ancient Architecture, Biblical Archaeology, Israel, Lachish, New Discoveries and tagged Art & Architecture, C-14, Discoveries, idols, Lachish, radiometric dating. Bookmark the permalink.

1 Response to The Tel Lachish Excavation: Field Report from Week 1