A Palace of David Discovered at Khirbet Qeiyafa?

The latest big archaeological news is the press announcement that a Palace of King David has been discovered in the Judean foothills at Khirbet Qeiyafa, a city dating to the time of his reign. Besides the palace, a large pillared storehouse to manage taxes in kind (oil, wine, grain, etc.) was discovered along the northern edge of the city.

These discoveries are from the site I’ve worked the past five seasons. I mentioned the Iron Age fortress (“David’s Palace”) last year in a post that included a photo. The long wall was identifiable as the central building of the Iron Age city and was a large factor in the decision to excavate one more season at Qeiyafa in 2013.

The “David’s Palace” title is certainly tweaked for media exposure. For better and for worse, it worked. The story hit Israeli news sources and moved to American media in less than a day. Some interested parties have already written to criticize the sensationalism of the announcement. I understand that point of view. The media consists of people whose training is journalism, not archaeology. Many will readily soup up a headline and a story to gain readers. On the other hand Bible-related stories tend to hit big, so perhaps we should acknowledge up front that any discovery with Davidic implications will not stay small anyway. In any case, I’ll leave this discussion for others and move on.

I have worked Khirbet Qeiyafa for five years and even helped to uncover the pillared “storehouse” building in 2012. My M.A. thesis addressed the transition of Israelite society in the late-11th and early-10th centuries. Having been involved in the site and the period, here are some of my initial thoughts:

Clarify the terminology: The term “palace” does not refer to an opulent castle or some luxurious, spacious estate. It should be understood as an administrative center or fort that extends the influence of some political or military authority. In a relatively poor society such as early Iron Age Israel/Judah, such a building would have practical rather than aesthetic value. It is no surprise one of the surviving rooms has evidence of metal industry for producing weapons and/or tools. It was not built as a royal residence, though a ruler or governor would probably stay there during a visit.

Parallels? This reminds me of the Iron Age fortress building at Lachish. Like the structure at Qeiyafa, it’s by far the largest building at its site and is clearly public in nature. The Lachish structure is a bigger, later building with a couple of expansions, but probably served some similar purpose. Ancient fortified cities typically had a fort or “palace” that served administrative and defensive functions. There are later Iron Age parallels for “palaces” and storage buildings at other sites in Israel and Judah. I’d be interested in a study comparing/contrasting some of them with what has been found at Qeiyafa.

The foundation of the central fortress at Lachish. (Photo by Luke Chandler)

Implications: At this moment the fortress structure and the site in general point to a centralized authority over the region in the late-11th or early-10th century B.C. Ancient texts, including the Bible, give us Philistine, Canaanite, and Israelite/Judahite possibilities for that place at that time. The city is clearly not Philistine but carries several markers suggesting Israelite/Judahite inhabitants. Was it Canaanite? That must be demonstrated, along with a purpose for building the city where it is. Whoever built it did so under the nose of the Philistines, who apparently were unable to prevent its construction. Did it belong to an Israelite or Judahite polity led by David? Quite possibly, maybe even probably, though we can’t prove anything that specifically right now. Some individuals are professionally/personally invested in a “fictitious David” paradigm to the extreme and will automatically deny anything suggesting the contrary. Still, we cannot yet rule out other possibilities even if they seem less likely.

Don’t want to accept Israelite or Judahite explanations? One must then ask, who else would be defending the Elah Valley corridor from the Philistines, and why? We have no textual evidence for another expansionist polity in that region at that time. In my view, with the present evidence, it’s hard to make a case for a Canaanite polity producing Qeiyafa. The simpler answer is usually the better one, which points to Israelites/Judahites.

Many words have been and will be written about this fortress and its implications. Here are a few more thoughts, in no particular order.

The Qeiyafa staff is working to publish the remaining seasons. The 2007-2008 volume has been out for a while. Two more volumes will cover the 2009 to 2013 seasons.

The Iron Age fortress wall at the end of the 2012 season. As you can see the top surviving course was just a few inches below the modern ground level. (Photo by Luke Chandler)

The lower outside wall on the bedrock is the Iron Age fortress as it appears at the end of the 2013 season at Qeiyafa. Some inner walls are clearly visible. The walls and corner encompassing the tree are a Byzantine intrusion that obliterated most of the original Iron Age structure.  (Photo by Sky View, courtesy of the IAA) 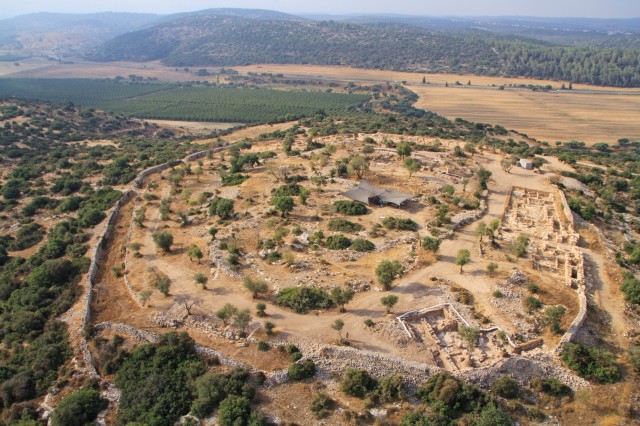 An aerial view of Khirbet Qeiyafa from the north. The pillared “storehouse” building is the excavated area marked by white sandbags to the right of bottom center. The central fortress building is above the black shade tents in the middle of the photo. (Photo by Sky View, courtesy of the IAA) 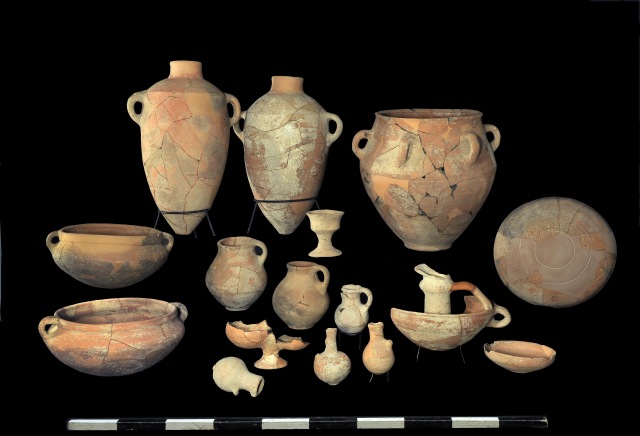 The pottery assemblage presented at the press announcement. (Photo by Clara Amit, courtesy of the IAA)

I was surprised by the press release this morning. I had been planning to post on the Area W building down the hill from the city. It dates several centuries later and turned out to be very interesting. I’ll now hold off on that for a few days. What we have here in the early Iron Age is already generating plenty of discussion.

Luke holds an M.A. in Ancient and Classical History and has been an adjunct professor at Florida College in Temple Terrace, Florida. Luke and his wife Melanie have five children. He serves as a minister with the North Terrace Church of Christ and has participated in multiple archaeological excavations in Israel. Luke leads informative, meaningful tours to Europe and the Bible Lands.
View all posts by LukeChandler →
This entry was posted in 2012 Khirbet Qeiyafa excavation, 2013 Khirbet Qeiyafa excavation, Ancient Architecture, Biblical Archaeology, General Archaeology, Israel, Khirbet Qeiyafa, Lachish, New Discoveries. Bookmark the permalink.

8 Responses to A Palace of David Discovered at Khirbet Qeiyafa?