We’ve begun the final season of work at Khirbet Qeiyafa. Here are some photos with brief descriptions of what’s going on.

Prof. Yossi Garfinkel giving an overview of the site to the dig volunteers. This group consists of people from their teens to their 60’s. For most of the group, this is their first experience at an archaeological dig. A few of the college students are Archaeology, Anthropology, or Religious Studies majors, but there are also students studying Music (a French Horn player!) and Nursing, among other things. We have educators, a CPA, and even a career chemist who tried it for the first time last summer and got hooked. (Photo by Luke Chandler)

My work square for this week is down the hill a bit from the ancient city. It’s some kind of building that so far dates to around the time of King Josiah in the 7th century BC. This is around 300 years later than the city above. It has some big, heavy stones in the outer walls. Was it a military watchtower? Was it built on top of an older structure? Was it destroyed violently or simply abandoned? What kinds of things are buried inside? Those are some of the questions we’re looking to answer over the next few days. 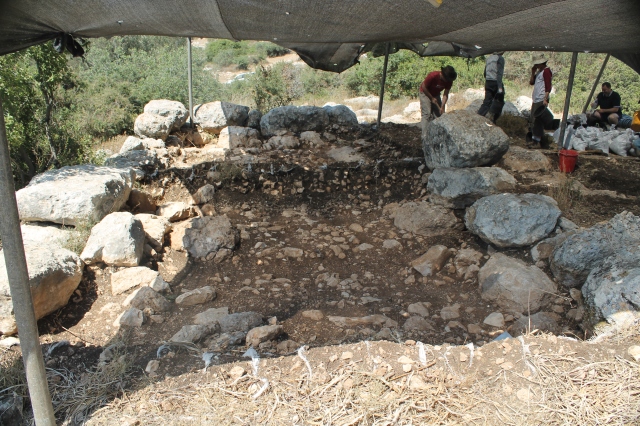 My work area this week. We’re actually digging to the right (east) of this photo at the moment. Once we’ve clarified the architecture, we’ll have a better idea of what this may be. Uncovering objects on the floor level will no doubt be helpful. What are we going to find here? (Photo by Luke Chandler)

We started our work just to the right of the above photo. Those large rocks you see on the right side are actually inside the building. We found the last outer wall almost immediately, as you can see below. Once this new area reaches the depth of the rest of the building, we should be close to the floor level and (hopefully) start finding the good stuff.

Our work area. You can see the wall we are uncovering. It sits just below the current ground level, which means nothing has probably been built here since this tower/house was destroyed, probably more than 2,600 years ago. We’ll find out more as we go down.  (Photo by Luke Chandler)

(Something’s buggy with the connection here. If the photo below does not appear on your screen, click the space and a nice version should appear for your viewing pleasure.)

A coin from the Jewish revolt against Rome. These kinds of coins were stamped with the year of the war in which they were minted. This one looks to be from either the second or third year of the war – either AD 67 or 68. (Photo by Luke Chandler)

Up on the hill, two groups are finishing up areas from last year. One, Area F, is a building with pillars and a paved floor. This means it’s likely a public building of some kind. It has at least a couple of levels separated by hundreds of years. We’ll know more in a few weeks. The other work zone, Area A, is part of the central fortress from 3,000 years ago. Maybe there’s something really nice inside such an important building.

By the way, my square is Area W. We’re outside the city, which throws off our neat little alphabetic sequence. (We’ve worked areas A, B, C, D, E, F… and W!)

Next year we will begin a new excavation at Lachish, one of the premier archaeological sites in the Bible Lands. If you are interested in being a part of that, start planning now for the possibility. Begin saving some money and plan for a trip around late June or mid-July. The exact dates of next year’s trip are not yet known but they will likely fall within that time frame. Are you wishing you were here experiencing the biblical past right now?

Luke holds an M.A. in Ancient and Classical History and has been an adjunct professor at Florida College in Temple Terrace, Florida. Luke and his wife Melanie have five children. He serves as a minister with the North Terrace Church of Christ and has participated in multiple archaeological excavations in Israel. Luke leads informative, meaningful tours to Europe and the Bible Lands.
View all posts by LukeChandler →
This entry was posted in 2013 Khirbet Qeiyafa excavation, General Archaeology, Israel, Khirbet Qeiyafa, Lachish, New Discoveries and tagged Archaeology, coins, Jewish revolt, Khirbet Qeiyafa, Lachish, Yosef Garfinkel, Yossi Garfinkel. Bookmark the permalink.