In Spain for Two Weeks

Posted on January 5, 2013 by LukeChandler

I have arrived in Sevilla (a.k.a. Seville), Spain, to begin a nearly two-week visit in the country. This trip is primarily about being with Christians, but there are also some interesting things to see and learn about the area. I’m here with my father and we’ll be with two churches in the Sevilla area and with a congregation in Barcelona.

My previous visit here was four years ago. I understand that the severe economic crisis in Spain has cost a number of Christians here their jobs. Our hope is to offer some measure of strength and spiritual encouragement to anyone who may benefit from it. The Christians here have certainly encouraged me in the time we’ve previously shared.

Here is an interesting tidbit for “Star Wars” fans. The “Plaza de España” is located in Sevilla. It marks the reunification of Spain following the expulsion of the Moors in the 15th century. Scenes from Star Wars: Episode II: Attack of the Clones were filmed in the “Plaza de España,” including a scene on this very staircase. No doubt someone will recognize it, eh? 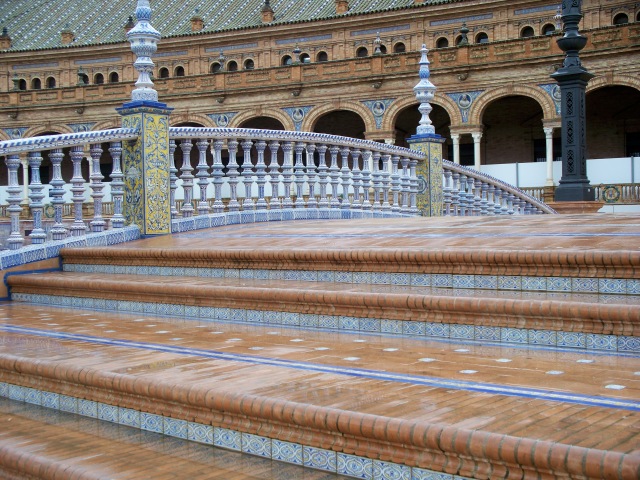 Staircase at the Plaza de España in Sevilla, Spain. Notice the intricate designs that reflect Islamic influence from the Moorish conquests many centuries ago. A scene from the Star Wars film “Attack of the Clones” was filmed on this staircase. (Photo by Luke Chandler)

Luke holds an M.A. in Ancient and Classical History and has been an adjunct professor at Florida College in Temple Terrace, Florida. Luke and his wife Melanie have five children. He serves as a minister with the North Terrace Church of Christ and has participated in multiple archaeological excavations in Israel. Luke leads popular study tours to Europe and the Bible Lands.
View all posts by LukeChandler →
This entry was posted in Christians in Other Places, Evangelistic Work, Overseas trips, Spain, Spanish evangelism, Travel and tagged Attack of the Clones, Barcelona, Evangelism, Moorish conquest, Moors, Plaza de España, Sevilla, Spain, Star Wars, Travel. Bookmark the permalink.

1 Response to In Spain for Two Weeks