After nearly 1,500 years, the Frankincense tree returns to Israel

1,500 years after the last frankincense tree disappeared from the Holy Land, Dr. Solowey has managed to grow the first shoots of a tree whose scented white sap was once worth more than gold.

Matthew Kalman has an interesting article about a famous biblical plant long absent from the Bible Lands. The scientist attempting to resurrect the frankincense tree is Israel is the same one who brought the extinct Methuselah date palm to life from a 2,000 year-old seed.

“This is the first frankincense tree to set seed in Israel in 1500 years,” Dr. Solowey told me as she presented the tiny sapling for its first public photo-call this week. “It was necessary to bring this variety back to the country because the last people growing these trees near the Dead Sea left and the trees left with them.”

Dr. Solowey, Director of the Center for Sustainable Agriculture at the Arava Institute, has an international reputation as a plant-whisperer, able to revive ancient species, save plants threatened with extinction and domesticate crops for medical and commercial use. 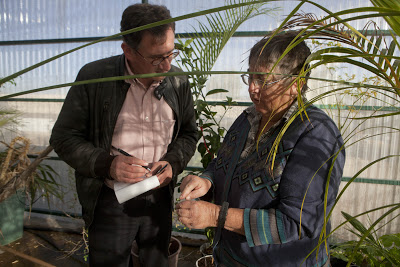 Dr. Solowey in her plant nursery at Kibbutz Ketura in Israel. (Courtesy of Matthew Kalman)

Frankincense sap has a flowery aroma and produces a complex scent when burned as incense. It is said to have been a key ingredient in the priestly incense used in Solomon’s temple. The sap is a good anti-inflammatory and had numerous medicinal uses in antiquity.

The frankincense tree is surprisingly difficult to cultivate today. Of the three frankincense cuttings received from outside the country, only one of them eventually flowered. Dr. Solowey nurtured the new seeds and “succeeded for the first time since the Roman era to grow a new sapling” in Israel. This process required a special fertilizer made from seaweed. Dr. Solowey believes a cooler ancient climate was a factor in the tree’s ability to thrive long ago.

Ein Gedi, an oasis on the Dead Sea’s western shore, was a major cultivator of these trees and other spice/medicinal plants in antiquity.

An ancient inscription in the mosaic floor of the synagogue at Ein Gedi curses anyone “revealing the secrets of the town” – understood by scholars to be a primitive form of patent control over the secret methods of production. When the ancient Jews were driven from the Holy Land 1,500 years ago, they took their secrets and their wondrous trees with them to Yemen and Egypt.

The full article notes that ancient Ein Gedi, with its frankincense, myrrh, and other products, would have been a convenient stop for any Magi traveling from the Orient to the Judean highlands.

Luke holds an M.A. in Ancient and Classical History and has been an adjunct professor at Florida College in Temple Terrace, Florida. Luke and his wife Melanie have five children. He serves as a minister with the North Terrace Church of Christ and has participated in multiple archaeological excavations in Israel. Luke leads popular study tours to Europe and the Bible Lands.
View all posts by LukeChandler →
This entry was posted in Flora and Fauna, Israel and tagged birth of jesus, date palm, Ein Gedi, elaine soloway, En Gedi, frankincense, frankincense tree, gold, kibbutz ketura, magi, methuselah, myrrh, spices, wise men. Bookmark the permalink.

1 Response to After nearly 1,500 years, the Frankincense tree returns to Israel