Update on the Khirbet Qeiyafa Dig: One More Season with a Twist

A few months ago it appeared 2012 would be the last dig season at Khirbet Qeiyafa, one year earlier planned. That is no longer the case, and there is a twist.

In the last days of the 2012 season, after concluding the site had been sufficiently excavated with all major questions answered, we turned up a 30 meter-long wall from the central administrative building that dates to the late-Iron I/early-Iron IIa period. (This is the biblical time of Kings Saul and David) The structure is located in Area A at the highest point of the site and appears to have a doorway facing the (southern) gate in Area C. 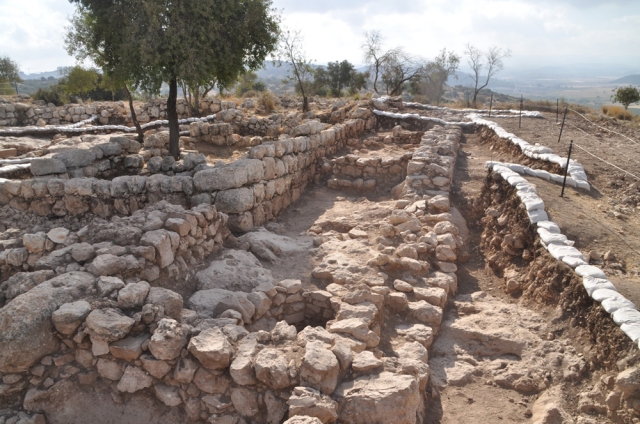 Area A at Khirbet Qeiyafa. The newly-discovered Iron Age wall runs from front-to-back-right in the photo. This wall dates to the time of Kings Saul and David. Notice how close the modern ground level is to the Iron Age level. The structure surrounding the trees left of center dates to the Byzantine period, some 1,500 years later than the Iron Age wall. (Photo courtesy of the Khirbet Qeiyafa excavation)

This discovery led to a change in plans. There will be one more season at Kh. Qeiyafa in 2013 to finish excavating the newly-discovered central building. Excavators also plan to clarify some structures in Area F along the northwestern side of the city.

The Twist: The work at Qeiyafa should require only a partial season, so the excavation team will use the remaining weeks to begin work at another Judahite site. The new site will be either Socoh (across the valley from Qeiyafa) or Tel Lachish, depending on how the permits work out. We should know the answer in a few weeks.

Both Socoh and Lachish are believed to have significant occupation levels from the 9th century B.C. This is important since we currently have so few physical remains from early Judah. Qeiyafa has filled in a lot of blanks as a 10th century B.C. site. Socoh or Lachish should provide fresh information from the 9th century. Biblically, these are the periods of the United and Early Divided Kingdoms.

Relatively little archaelogical work has been done in the Shephelah (Judean foothills). That is changing in large part from the rich finds at Khirbet Qeiyafa. There are now several digs operating in the region. They should eventually provide us with a much clearer snapshot of life in ancient Judah and the surrounding areas.

Luke holds an M.A. in Ancient and Classical History and has been an adjunct professor at Florida College in Temple Terrace, Florida. Luke and his wife Melanie have five children. He serves as a minister with the North Terrace Church of Christ and has participated in multiple archaeological excavations in Israel. Luke leads informative, meaningful tours to Europe and the Bible Lands.
View all posts by LukeChandler →
This entry was posted in 2012 Khirbet Qeiyafa excavation, Biblical Archaeology, Israel, Khirbet Qeiyafa, New Discoveries and tagged Archaeology, Biblical Archaeology, Elah Fortress, Iron IIa, Khirbet Qeiyafa, Lachish, Socoh. Bookmark the permalink.

5 Responses to Update on the Khirbet Qeiyafa Dig: One More Season with a Twist