In a surprise announcement, archaeologists have revealed that Khirbet Qeiyafa, an ancient city being excavated along David and Goliath’s battlefield, is a nexus for remarkable magnetic forces. Humans have proven capable of channeling these energies and, with practice, levitating and maneuvering metallic objects.

Shlomo López, the excavation’s chief geologist and astrologist, compares Khirbet Qeiyafa to both the Star Wars universe and the X-Men. “It takes about a week for our volunteers to sort themselves into ‘Jedi’ and ‘Sith’ camps and compete in finding artifacts. The ‘Sith’ have a knack for telekinetically hurling tools at competitors. One guy even had the chutzpah to float Yossi Garfinkel when he showed up with that large belt buckle and steel-toed boots. It was like Magneto tossing around Wolverine. The fun quickly stopped when Yossi levitated the kid into that mysterious Area D cave. He hasn’t been heard from since.”

This discovery may illuminate how David was able to hit Goliath with such remarkable precision in the famous biblical battle. David, aware of the area’s unique properties, may have selected “five smooth stones” laden with metallic ores which could be directed as Iron Age “smart” bombs. Furthermore, Goliath’s considerable bronze armor would have rendered him a big Tinker Toy in David’s metal-bending hands. “The Philistine would have been crumpled like an empty Hebrew National hot dog wrapper. He never had a chance,” notes Rabbi Tevye MacDougal.

Tests indicate that precise maneuverability of an object is achieved with two people working together. One concentrates on the x axis of movement, the second on the y axis, and both coordinate on the z axis. The photo below shows one of many tests conducted at the site. In this case, a bucket with a metal handle. 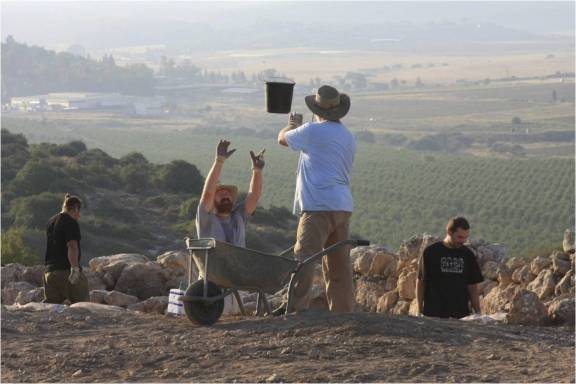 Volunteers at Khirbet Qeiyafa demonstrating the unique magnetic forces that, when carefully manipulated by gravitationally attractive objects such as human hands, permit levitation of metal objects around the site such as the metal-handled bucket. (Photo by David Adams)

The archaeological staff is preparing a preliminary article on the energy nexus. In the meantime, some scholars have expressed concerns about the delay in publishing this previously-unrecorded phenomenon. “Research is ongoing,” responded an IAA source on condition of anonymity. “We have top men working on it right now.”

Luke holds an M.A. in Ancient and Classical History and has been an adjunct professor at Florida College in Temple Terrace, Florida. Luke and his wife Melanie have five children. He serves as a minister with the North Terrace Church of Christ and has participated in multiple archaeological excavations in Israel. Luke leads informative, meaningful tours to Europe and the Bible Lands.
View all posts by LukeChandler →
This entry was posted in Humor, Khirbet Qeiyafa and tagged April 1st, April Fools, Khirbet Qeiyafa. Bookmark the permalink.