A Visit to the Semitic Museum at Harvard

In April, I took the teens from the church where I work to Boston over their Spring Break. One of our stops was the Semitic Museum at Harvard University. Our visit was an enjoyable step into biblical times.

First thing to note: Admission to the Semitic Museum is free. Reserved group tours are also free. The museum requested a donation of $2 per person, something we were glad to do. The visit is worth much more.

The museum has several exhibitions. We spent the majority of our time in the “Houses of Ancient Israel” exhibit. It consists of a reconstructed “Israelite” house based on archaeological finds from Late Bronze and Iron Age Canaan. Good attention was given to detail. The house and its implements are modern reconstructions, though all of the pottery is authentic and dates to the biblical period.

The centerpiece of the "Houses of Ancient Israel" exhibit at Harvard's Semitic Museum. This is based on numerous archaeological examples that have a similar blueprint. There are two interior levels to the house. The lower level was used for storage and cooking. Family members slept on the upper level, though the roof was often used for this purpose due to its additional space and more-comfortable atmosphere.

You may have noticed the sheep in the bottom level. Animal residue (probably manure?) has been found inside some excavated houses, indicating that a sheep or goat was occasionally kept inside. This helps us visualize a story told to King David by Nathan the prophet. Nathan described a poor man who had one little lamb. “It grew up with him and with his children. It used to eat of his morsel and drink from his cup and lie in his arms, and it was like a daughter to him.” (2 Samuel 12:3) This sounds like an “indoor” animal such as the one pictured here.

The docent made numerous connections to the biblical text. His explanations were insightful and brought the Bible to life. The full explanation for the “Israelite House” exhibit took around 45 minutes, and we were able to take in other exhibits on ancient Near Eastern peoples. 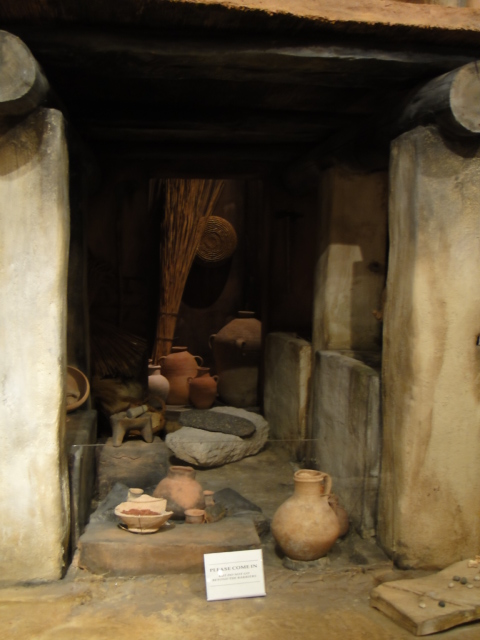 The "kitchen" area of the Israelite house. Notice the light/dark colored stones toward the back. These were used for grinding grain. A small cooking fire was set up in the foreground.

A view of the upper level in the Israelite house. The middle area is set up for a meal. A loom site on the back wall and a recessed cultic area is visible in the left wall, complete with a few household idols. This level could also be used for sleeping if inclement weather prevented use of the roof. 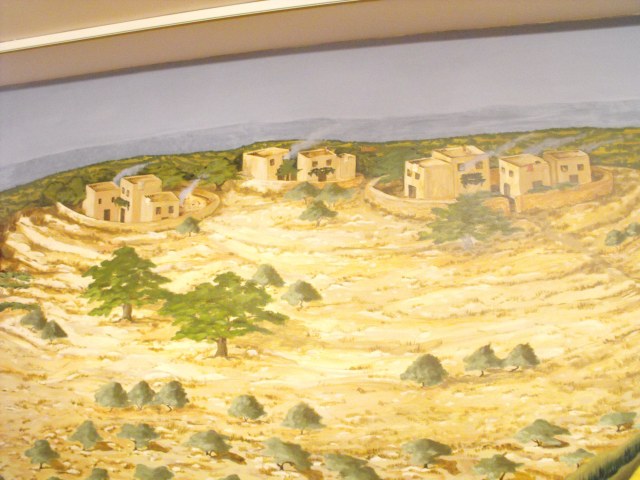 Artist's depiction of an 'Israelite house' settlement in the hill country. Each housing cluster probably contained an extended family whose sons added houses as they married. Bible characters such as Gideon probably lived in settlements similar to this. Gideon, being "the least" in his father's house, may have added his house next to those of his father and older brothers.

Plan your visit:  Here is a visitor information page for the museum.  Though admission is free (donations requested), you must pay to park. I discovered the best value (and the best chance to guarantee a parking spot) was to purchase a parking pass online for the Oxford Street garage. It is a very short walk from the parking garage to the museum building, located at 6 Divinity Avenue in Cambridge, MA. (There’s an address for you GPS types.) 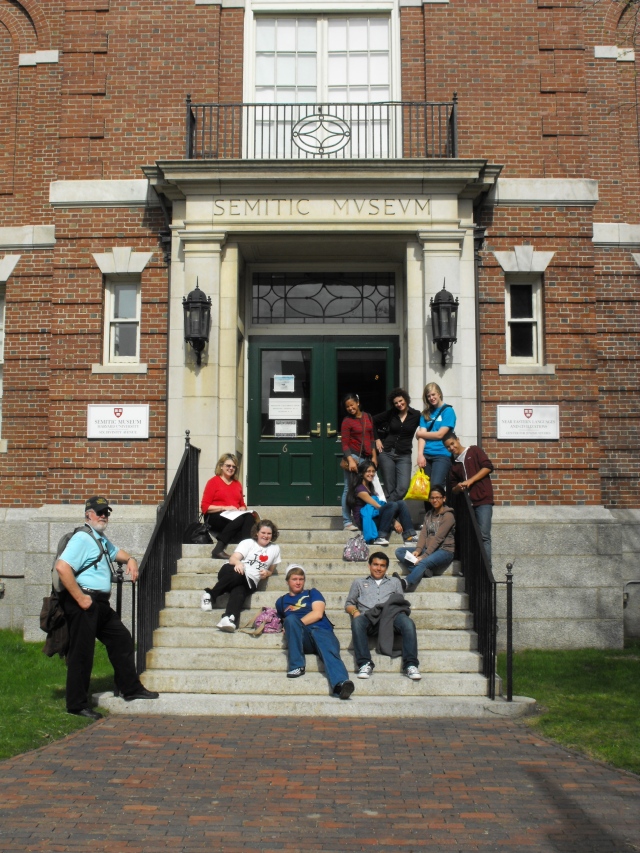 Our posse relaxing after an enjoyable visit. The Semitic Museum does not occupy a particularly large building. One should keep noise down on weekdays as university classes are sometimes meeting near the exhibits. Photo by Luke Chandler.

Luke holds an M.A. in Ancient and Classical History and has been an adjunct professor at Florida College in Temple Terrace, Florida. Luke and his wife Melanie have five children. He serves as a minister with the North Terrace Church of Christ and has participated in multiple archaeological excavations in Israel. Luke leads popular study tours to Europe and the Bible Lands.
View all posts by LukeChandler →
This entry was posted in Ancient Architecture, Biblical Archaeology, Interesting places to visit, Israel, Museums and tagged Early Israel, Harvard, Israelite house, Semitic Museum. Bookmark the permalink.