One morning a number of us were pulled away from our regular excavation areas and sent to clear a section of the ancient city’s outer wall.

Here is another view of us at work. 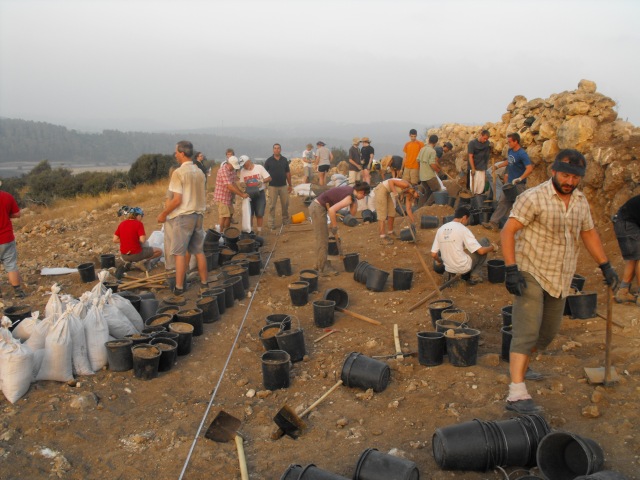 Clearing topsoil away from the Iron Age city wall of Khirbet Qeiyafa. Photo by Royce Chandler.

Here is how the wall looked after we cleared away the topsoil.

A section of Khirbet Qeiyafa's Iron Age wall, built around the time of King David. This section is near the southern gate of the city. Notice how the wall is built on the bedrock. Photo by Royce Chandler.

Khirbet Qeiyafa’s walls were built on bedrock for at least two reasons.

The Iron Age walls are remarkably well-preserved in many places. This season I have helped to uncover city walls that are around 8 feet high. It’s a lot of digging, but the architecture is beautiful. I’ll soon try to post a photo or two of the walls in my area.

Luke holds an M.A. in Ancient and Classical History and has been an adjunct professor at Florida College in Temple Terrace, Florida. Luke and his wife Melanie have five children. He serves as a minister with the North Terrace Church of Christ and has participated in multiple archaeological excavations in Israel. Luke leads popular study tours to Europe and the Bible Lands.
View all posts by LukeChandler →
This entry was posted in 2010 Khirbet Qeiyafa excavation, General Archaeology, Khirbet Qeiyafa, Short videos and tagged Archaeology, city walls, Elah Fortress, Khirbet Qeiyafa. Bookmark the permalink.