Grady Persell, who is traveling with me, found a sling stone at Khirbet Qeiyafa this past Thursday. 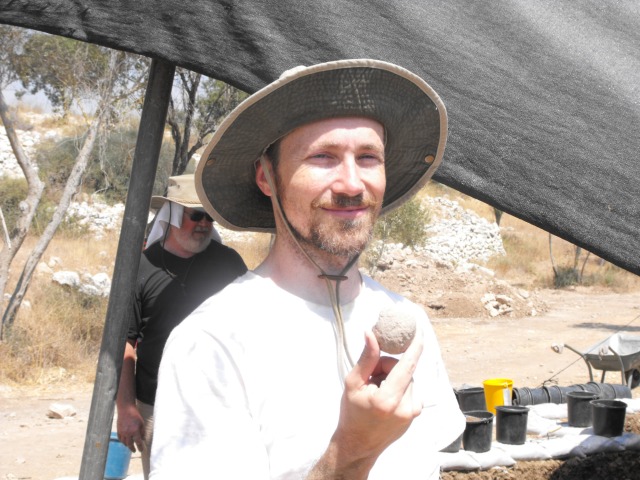 Grady Persell holding a sling stone he found at Khirbet Qeiyafa. It was discovered in the casemate city wall. Photo by Luke Chandler.

Many who see sling stones are surprised at their large size. Perhaps some children's songs and stories about David lead us to regard them as much smaller. Sling stones were weapons of war, capable of killing opponents from a distance. Imagine this stone flying toward your head at 60 or 70 miles per hour. Quite nasty. Photo by Luke Chandler.

This is not the first sling stone found at Khirbet Qeiyafa. Several were found earlier this season and several were also found last year. Still, to find a sling stone where David fought Goliath is always nice!

Luke holds an M.A. in Ancient and Classical History and has been an adjunct professor at Florida College in Temple Terrace, Florida. Luke and his wife Melanie have five children. He serves as a minister with the North Terrace Church of Christ and has participated in multiple archaeological excavations in Israel. Luke leads informative, meaningful tours to Europe and the Bible Lands.
View all posts by LukeChandler →
This entry was posted in 2010 Khirbet Qeiyafa excavation, Biblical Archaeology, Khirbet Qeiyafa and tagged ancient sling, Grady Persell, sling stone. Bookmark the permalink.

6 Responses to A sling stone find at Khirbet Qeiyafa