A Surprise Visitor on Our Final Day at the Site

Posted on August 7, 2009 by LukeChandler

Some volunteers were cleaning the site for photography, while others (including myself) were erecting fences around the excavated areas. I looked up at a random moment and recognized Israel Finkelstein walking toward the gate area where I have excavated for two weeks.

Israel Finkelstein is a professor of Archaeology at Tel Aviv University. For years, he has been a leading face of Biblical Minimalism, which is a perspective that seeks to minimize the Bible as a relevant source of historical information. He has advocated a revised history of the early Iron Age in his published articles, in a best-selling book, and on various television documentaries. Finkelstein’s revisionist conclusions include:

On what basis does he advocate these points? Much of it boils down to a lack of evidence. Archaeologists had found plenty of material remains (pottery, structures, etc.) from the centuries before and after David’s time, but very little from the early Iron Age in the 11th and 10th centuries B.C. (Saul, David and Solomon would be in the early Iron Age.) This is not a complete synopsis of Finkelstain’s arguments, but I will save that for another post.

It is risky to argue from what has not been found, because it is possible someone will eventually find it. This is why the Khirbet Qeiyafa excavation has become important. The evidence there so far points to an organized, strong, Jerusalem-centered kingdom in the 10th century B.C. – the early Iron Age of David.

If this season’s excavations continue to point toward a fortified, early Iron Age Israelite city, it will be strong evidence for the Bible accounts and a powerful blow to Biblical Minimalism. Israel Finkelstein’s visit to Khirbet Qeiyafa is no small thing. We will continue to monitor the evidence and the debate. 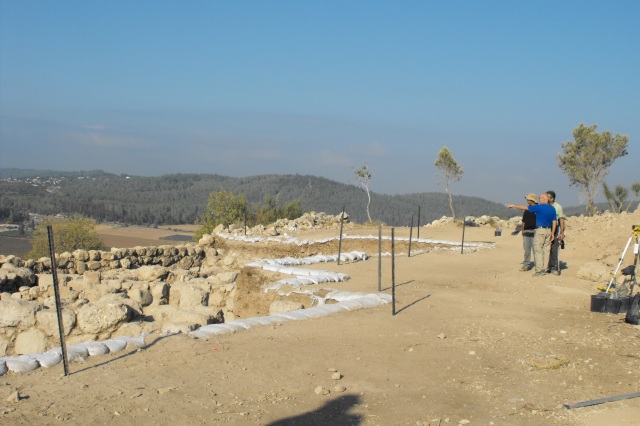 Yossi Garfinkel and Israel Finkelstein discussing an Iron Age gate at Khirbet Qeiyafa. Yossi is pointing to the area of the drain I helped to excavate earlier in the week. The drain produced material evidence that, so far, places it squarely in the early Iron Age. Further analysis will yield more evidence regarding the age of the drain and the original gate area.

Luke holds an M.A. in Ancient and Classical History and has been an adjunct professor at Florida College in Temple Terrace, Florida. Luke and his wife Melanie have five children. He serves as a minister with the North Terrace Church of Christ and has participated in multiple archaeological excavations in Israel. Luke leads popular study tours to Europe and the Bible Lands.
View all posts by LukeChandler →
This entry was posted in Biblical Archaeology, General Archaeology, Israel, Misuses of biblical archaeology and tagged Archaeology, Biblical Archaeology, Elah Fortress, Khirbet Qeiyafa. Bookmark the permalink.